Incoterms have been made and published by the International Chamber of Commerce (ICC) in Paris. One of the tasks of the ICC is to make it easier for companies in different countries to trade which each other. Incoterms are accepted world-wide. The present edition of Incoterms is dated 2020.

The ICC notes that the Incoterms® rules have become an essential part of the daily language of trade and that they have been incorporated in contracts for the sale of goods worldwide and provide rules and guidance to importers, exporters, lawyers, transporters, insurers and students of international trade.

The existing Incoterms cover different areas. The adoption of any of the trade terms indicates at which point the delivery of the goods shall take place. But each one works different from the other one´s. The official ICC website publishes the Preambles to each term in read-only format, together with basic information and background. The Preambles do not spell out the obligations of buyer and seller, which are essential to the correct use of Incoterms.

This information may be obtained by consulting the full published texts of the existing Incoterms, available from ICC Publishing and ICC national committees throughout the world.

Some INCOTERMS (including the 2 new ones) shall be explained in a nutshell below:

FOB (“Free On Board”)
In a FOB contract it will be the duty of the seller to place the goods over the ship´s rail and to deposit them on board the vessel nominated by the buyer at the named port of shipment or procures the goods already so delivered. When the goods have arrived on board of the vessel the risk of risk of loss of or damage to the goods passes to the purchaser.

CIF (Cost, Insurance and Freight)
In a CIF contract the seller has to perform the contract by delivery of the shipping documents to the buyer. Also pursunt ot CIF the risk of loss of or damage to the goods passes to the purchaser when the goods have arrived on board of the vessel the risk of risk.

FCA (“Free Carrier”)
In a FCA contract the seller undertakes to deliver the contract products cleared for export, to the carrier nominated by the buyer at the namend place. It is crucial to Name the place of delivery exactly and without ambiguity.

In accordance with “Delivered at Terminal” the seller delivers when the unloaded goods are placed at the disposal of the purchaser at a named terminal at the named port or place of destination.

In a DAP contract the seller delivers when the goods are placed at the disposal of the buyer on the arriving means of transport provided that they are ready for unloading at the named place of destination.

The ICC was pleased to announce the publication of Incoterms® 2020, as ICC clebrated its Centenary in 2019.

When a contract is made between persons or companies residing in different countries the question arises by which law the contract is governed. Different rules (as to capacity, formalities, etc.) apply in order to determine the applicable law. Concerning essential vailidity, interpretation and performance the contract is governed by the proper law of the contract. The parties may choice the law applicable to their contract. When there is no stipulation the proper law is the law with which the contract has the closest connection. It is presumed that the contract is most closely connected with the country in which the party who is to effect the caracteristic performance of the contract has is habitual residence (Art. 4 EEC Convention on private international law). In an international sales contract this would be the law of the seller. Under the EU Rome I Regulation anyway the law of the seller prevails.

Users should therefore never forget, that the Incoterms are applied and construed by national Courts or Arbitration Tribunals who may understand a term in a different way that the term will be understood in the purchasers country. Incoterms have to be incorporated into national law systems because they only direct some special aspects of a contract. Nowadays Incoterms are more frequently combined with the UN sales convention (CISG), promoted by UNCITRAL on April 11th, 1980 which has come into operation in 1991 and which is a part of German substantial law. Therefore the UN Sales Convention apply to each international sales contract if German law is the proper law of the contract, what will be presumed if the seller has his habitual residence in Germany. The parties may exclude the application of this Convention, but they have to do it expressly.

In Germany Incoterms are accepted as general trade terms (Allgemeine Geschäftsbedingungen). Incoterms apply to sales contracts only if the parties have agreed on them. German courts may review the terms. The German Unfair Contract Terms Act has been incorporated in the German Civil Code (BGB). Though normally qualified as commercial contracts International Trade Terms  like INCOTERMS are, as such, not fully exempt from the operation of the Unfair Contract Terms regulations. Notably Section 307 German Civil Code applies.

Goods sold remain property of the vendor until complete payment by the purchaser.

In case of insolvency of the buyer the seller is entitled to ask the insolvency-administrator to give back the delivered goods if they still exist in nature.  Stipulations on retention of title therefore are very important and frequently used in Germany.

If it is intended to use Incoterms under FIDIC terms and conditions care must be applied in order to avoid issues. Usually FIDIC forms of contract already establish a comprehensive set of clauses and provisions which are needed in a construction context. Users should definitely acquaint themselves with Sub-Clauses 7.7, 17.2 FIDIC Rainbow Edition, 1999 or Sub-Clauses 7.7, 17.1 FIDIC Rainbow Edition, 2017. 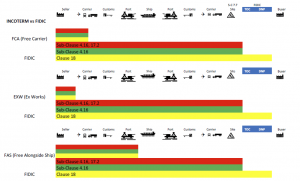